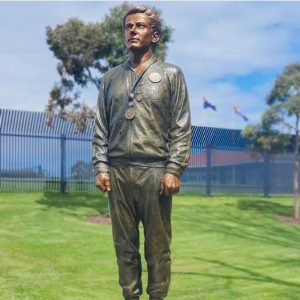 In celebration of Peter Norman Day, Athletics Australia, in partnership with the Victorian Government, unveiled a statue in honour of the 1968 Olympic sprinter in Melbourne today, and Russel Taib was delighted to be invited and able to attend the event.

Norman raced to the silver medal at the Olympic Games in Mexico City Olympics that year, clocking 20.06, a performance that still stands as the Australian national record 51 years later.

But it was Norman’s brave stand in solidarity on the podium afterwards with Tommie Smith and John Carlos of the USA, the gold and bronze medallists, respectively, that will be remembered as one athletics iconic sporting moments with a special place in Olympic history. As Smith and Carlos held their arms aloft joined in a Black Power salute, Norman stood beside them, motionless, but showing his support by wearing an Olympic Project for Human Rights badge alongside his silver medal.

Among those who attended the unveiling ceremony were his coach Neville Sillitoe, his mother Thelma and daughter Janita.

Neville (awarded a Medal of the Order of Australia in 2018 for services to athletics) coached Peter Norman and Denise Boyd (Commonwealth and Olympian sprinter, Australian athletics hall of fame) and Denise Boyd is Russel’s lead coach. Neville spotted Russel as potential sprinter as a junior school runner, encouraged him and inspired him along that path with tales of Peter Norman as a man and an athlete. To this day now 93 Neville still follows Russel’s emerging career and is a valued mentor.